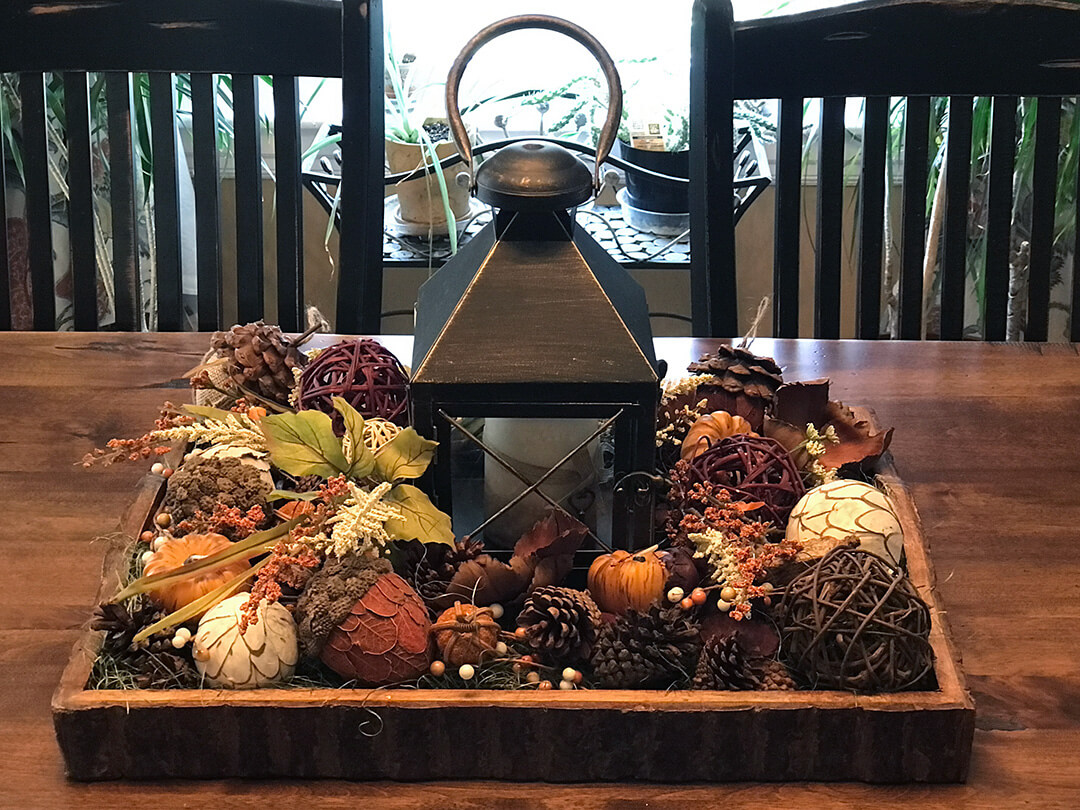 I don’t usually change decor with the seasons, but I was feeling a little creative recently.

So, I crafted a new Fall centerpiece for my dining room table. But here’s the best thing. I created it so it would be flexible enough to change with the seasons.

It’s sort of like having 4 (or more) centerpieces in one.

I can’t take credit for the idea, I searched around Pinterest and was inspired by this pin.

The design called for a wood tray and a black decorative lantern. I knew I had both. All I had to do was surround the lantern with a lot of Fall-ish pine cones and pumpkins.

Not only could I create a new centerpiece, I could do it at a bargain price.

Here’s the centerpiece I created for Fall:


I took a trip to Michael’s for some Fall leaves, pumpkins and pine cones and voila! There is really no magic formula to arranging a piece like this, but here’s what I did:

Already had: the tray that I’ve had for years and the lantern, from Pier 1.

Purchased: a bag of pinecone mix, garland, some faux pumpkins, a bag of Fall pieces (balls), Spanish moss, some flower picks, a few stray leaves and a couple of burlap roses.

1. I centered the lantern, placed it on a couple of coasters I had handy to give it some height and put a candle inside.

2. I surrounded the lantern with Spanish moss, which serves as a bed for everything and holds it all in place better;

3. I added everything else around it, starting with the pinecones, until I was happy with how it was all arranged. The most important thing is symmetry, with not too much in any one place and a balance of colors on all sides.

There you have it!

Total cost was a little less than $20. And, it’s certainly not an original idea, I clued you in on that, but pssst – no one knows that (except you, of course).

My sister loved the idea

So, we spent a day crafting a Fall centerpiece for her.

I think I may like hers even better. Notice the baby birds on a wire just in front of the lantern. And I LOVE the tray. 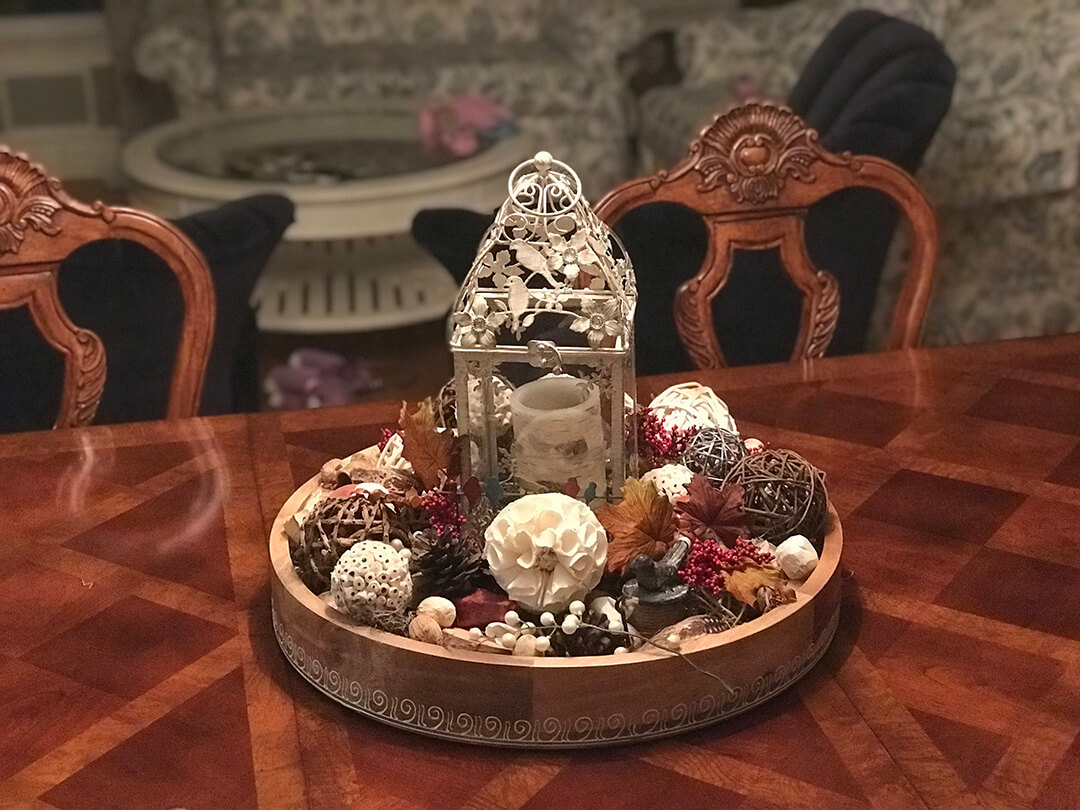 Both these centerpieces are versatile. With just a few changes they can (and did!) move easily into the holiday season.

Here’s my centerpiece, retrofitted for Christmas: 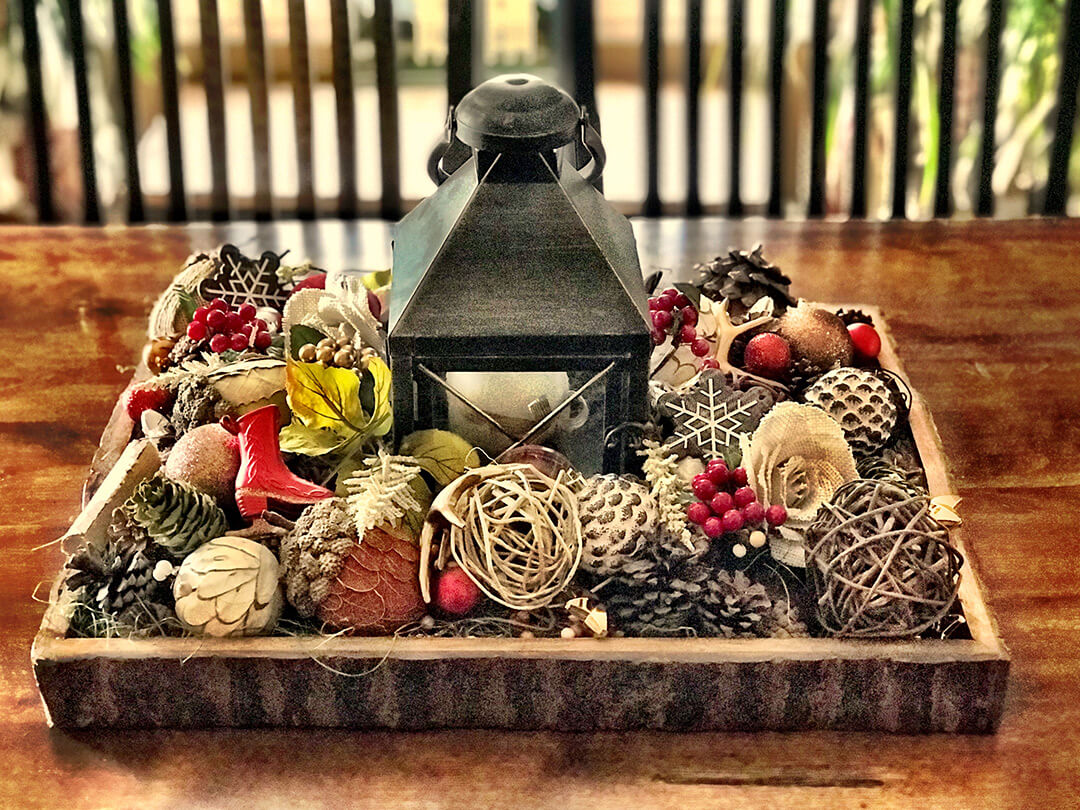 1. I kept the tray, lantern and the pinecones.

2. I removed anything that was Fall-ish

3. I then then added some Christmas-specific items which I bought all-at-once as a package in Home Goods.

4. A few sprigs of red and some red Christmas balls and I was done!

Total cost for the re-design was a little less than $10. Sweeeet!

Stay tuned, because after the holidays this piece of home decor will be transformed into something new.

About the rest of my dining room projects, visit my Tour my Dining Room page.

Do you have a favorite centerpiece? I love to see it.

And, if you take a stab at using my instructions I’d love to know how it went in the comments below!

There is nothing that thrills me more than hearing from readers. Please share your thoughts! Cancel reply

Thanks SO much for reading!

Are you enjoying this article? If so I would appreciate the heck out of it if you shared it. These icons will help...